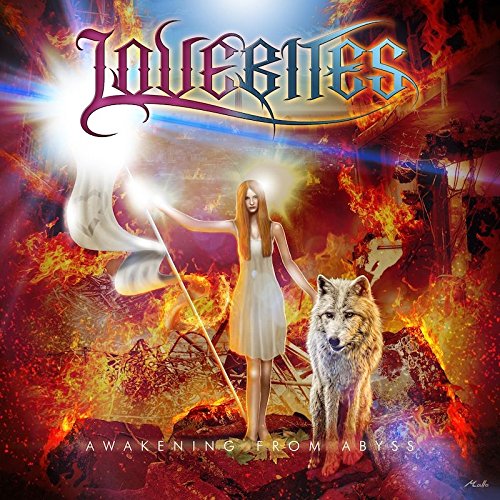 Power metal heroines LOVEBITES‘ highly acclaimed debut album AWAKENING FROM ABYSS is out now digitally and on CD this Friday across the UK and Europe via JPU Records. A limited edition including an exclusive t-shirt is also available.

The band has already received praise from members of Megadeth, Stratovarius and Helloween (amongst others) for their powerful mini album THE LOVEBITES EP, a limited release which sold out in Japan and was released in the UK and Europe with a poster, English liner notes and lyric translations

AWAKENING FROM ABYSS features all four songs from THE LOVEBITES EP, all re-recorded and arranged, along eight new tracks, including lead track Shadow Maker, the video of which sees the women thrash through six-minutes of unadulterated metal madness, highlighted by a blisteringly fast guitar battle between midori and new recruit mi-ya, soaring English vocals from asami, a relentless bassline and head bangs from miho, and powerful double-peddled, high-heeled drumming from haruna with her star-shaped cymbal.